If you happen to be one of the two followers of our blog, I must apologize for the monopolization of posts. But once more, it has not been so due to my having too much initiative but instead for my colleagues having none 😛

I’ll be fast – today song’s a great song whose original version I have known for a while, and recently I discovered two versions in two artists that I have listened to recently: The Cranberries (I did not forget my promise, but it is still not this time) and Dolly Parton (who has already been referenced in this blog due to a cover and an original).

But the main focus must go to the original version, which belongs to Elvis Presley, the King – not only because he must be given credited for having written a great melody and quite powerful lyrics (that unfortunately are still true more that 40 years later), but also because it is still the best version in my opinion (at least from the three I know). Hope you like it too 😉

Here you have both Dolly Parton and The Cranberries versions (these last one is especially good, in my opinion).

Beatles’ fans have probably recognized what this post is about by the title – and you’re not mistaken.

I’ve been mainly listening to Neil Young, but there have been too many Neil songs in this blog recently, so I thought I should give him (or you!) a break. And besides Neil Young, the one song that captivated me this week was The Beatles‘ Golden Slumbers. I had discovered it several months ago through a John Denver cover, but I only gave it more attention more recently when I listened to the Beatles version (not that John Denver’s isn’t good, quite on the contrary!). Although it is considered a separate song, there is not a separate version of it (as far as I know), being it part of a medley which also includes the great “Carry that weight” (to which the post title alludes) and others.

I’ll post the whole version, but here you have a link that contains only the two songs I mention (which are actually the ones I listen to). 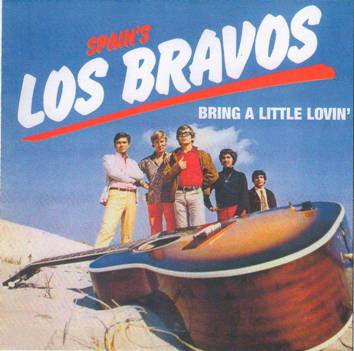 Los Bravos. Do you recognize the name? Well, if you don’t, they were another (almost) one-hit band (at least outside Spain).
I dare to say that most people from the Western World (here is an example) know the song Black is Black – if you clicked the previous link you should already be expecting this song 😛 But I also dare to say that most people know only Black is Black.

Well, I somehow am not one of those persons: some years ago I decided to listen to some Los Bravos songs, and it was actually a good decision – I like some of their songs. One of them is Bring a Little Lovin’ (a cover, by the way), one of the few Los Bravos songs besides Black is Black that charted in the US (#51).

Well, but all this to tell you that I was sitting on my couch watching tv when suddenly Bring a Little Lovin’ started playing in the introduction of a movie – A Beginner’s Guide to Endings. It surprised me a lot, as I thought I was the only person knowing the song 😛 and it was of course enough to make me watch the whole movie – which, by the way, I do not recommend.

But I do recommend the song, especially if you are in a good mood or if you want to be in a good one 😉

PS – I dedicate the post to Alfonso, for singing “Los Chicos con Las Chicas” with me several times 😉

Today I’ll bring you another classic from the 60’s (I am not sure, but I must have brought some before :P).

I got to know today’s song by listening to a Frusciante’s (my guitar idol, if you remember) cover. By the way, if you like John, this concert is a nice one to listen to! 😉

But well, after getting to know Frusciante‘s cover, I decided to listen to the most known version (I thought it was the original until 20 seconds ago), from a guy called Del Shannon, and it became a hit to me, being a top played and performed song – quite funny to play on the guitar and sing, I think.

You can also check Elvis Presley‘s and Kasabian’s versions, if you will.